The Myers-Briggs Type Indicator® is an assessment that aims to sort people into one of 16 different personality types. The indicator is derived from the work of Swiss psychoanalyst C.G. Jung, who first wrote about psychological type in his groundbreaking 1921 work, Psychological Types. The MBTI® assessment is used by 80 percent of the Fortune 500 companies and 89 of the Fortune 100 companies.  It is loved and hated by psychiatrists, adored and despised by internet users everywhere.

But no matter how popular the indicator is, how accurate or scientific is it really?

“Is this just another Buzzfeed-style test?”

“How do I know this is actually accurate?”

“Is this like….”What kind of Disney princess are you?””

In our social media culture we are inundated with new ways to pad our egos. It feels great to take a test and learn that you’re just like Daenerys Targaryen or you’re as dangerous as Loki! But where does the MBTI® stand in relationship to the rest of the personality tests on the market? That’s what we’re going to take a look at in this article!

Is the MBTI® Scientific?

According to Award-winning UCLA Professor Dario Nardi, there is scientific proof that the eight cognitive functions described by Carl Jung (and referenced in Myers-Briggs theory) actually correlate with brain activity. Nardi has spent years conducting EEG scans on people of different ages and genders to test whether or not psychological type actually shows up in the brain. Through his brain scans, he was able to find provable links between type theory and brain function. After conducting MBTI® assessments, he would hook individuals up to an EEG monitor and expose them to various activities, questions, and stimuli to observe how they used their brain in response. He was able to see how each of the 16 Myers-Briggs personality types consistently used very particular brain regions to solve problems or interact in the same experiments.

For example, Ne types (ENTPs, ENFPs, INTPs, and INFPs), when hooked up to an EEG monitor, exhibit more frequent trans-contextual thinking than the average person. This type of brain pattern shows up when people rapidly process stimulus across multiple brain regions, including regions that seem inapplicable at first. It’s what we use when we find relationships across situations, brainstorm, or find creative comparisons. This correlates with how Myers-Briggs and Carl Jung described Extraverted Intuition, the mental process favored by NPs.

Si types (ISTJs, ISFJs, ESTJs, and ESFJs), exhibit a mental flow state when recalling past experiences in detail. This “flow state” shows up on an EEG monitor when all neocortex regions are synchronized and at maximum amplitude. This correlates with the Myers-Briggs definition of Introverted Sensation as a function that focuses on comparing and contrasting past details to present experience.

Se types (ESTPs, ESTPs, ISFPs, ISTPs) show a “tennis-hop” brain pattern. This occurs when all regions of the neocortex are low amplitude and out of synch. It enables SP personality types to take tactical action, be attentive, and respond to surprise, incoming tasks.

Fe types (ESFJs, ENFJs, ISFJs, INFJs) show brain activity that reflects their focus on social responsibility and feedback. They use neocortex regions that help them communicate, evaluate other people’s behavior, and analyze for the future.

Fi types (ISFPs, INFPs, ESFPs, ENFPs) show high activity in brain region F8. This is where we rank information in order of importance or worth. It’s what we use when we say things like, “my values” or “my music”.

Ti types (INTPs, ISTPs, ENTPs, ESTPs) can holistically weigh numerous pros and cons of many uncertain or risky factors or options to come to a logical decision. This is largely because they rely so heavily on parietal brain region P4.

To sum it up, Dario Nardi found that the 16 different Myers-Briggs personality types used their brain in patterns that were unique to their type and coincided with the descriptions of Jung’s cognitive functions.

This is just a tiny glimpse of what Dario Nardi found when he did his research on personality type and the brain. You can find out much more in his book, Neuroscience of Personality: Brain Savvy Insights for All Types of People here.

You can also find more scientific research in the following links:

Here’s the Science Behind Your Myers-Briggs® Personality Type

Can the MBTI® Be Proven? What Reliability or Validity Testing Has Been Done?

Science isn’t just about brain scans, though. The MBTI® questionnaire itself is only useful if it can be shown to be reliable time and time again. If someone gets an ESTP result on the questionnaire one day, an INFJ result the next, and an ISTJ result four weeks later then how reliable is it?

The MBTI® Forms have been modified and perfected many times to ensure that it’s as accurate as possible. The indicator was created in 1942 and modified in 1977, 1987, and 1998. The questionnaire is meant to be given as part of a consultation process and not as a stand-alone “test”. This is what separates the MBTI® from many of its knock-off competitors like 16 personalities or other online tests.

In a typical Myers-Briggs consultation a client will:

This one-on-one consultation eliminates the likelihood that someone will mistype or get an inaccurate result on a test. Practitioners are trained to help clients sort out their most likely type and avoid typing themselves based on “masks” they might wear as a parent, friend, or employee. The indicator without the consultation is not nearly as effective.

The MBTI® has also been modified so that no gender differences get in the way of its accuracy. For example, the first version of the MBTI® tended to score many women as feeling types simply because when it was created (in 1942) many women were expected to exhibit feeling-typical tendencies. The questionnaire has since been modified so that even a woman pressured by society to fit a certain role can still get a “T” result if she is a thinking type.

What happens if you test one week as an ESTJ and the next week as an ISFP? While this is likely to happen in knock-off versions of the test, it’s much less likely to happen when the official MBTI® is administered. That’s because taking the actual assessment with a consultation gives the individual the chance to ask questions, clarify their true personality outside of work or home life, and helps them to get a result that isn’t based on an ever-changing “mood”.

In several case studies taken over the course of several months to a year, it was found that on average 75-90% of the people who take the MBTI® will retest and get the same result. This is actually quite high for a personality questionnaire and is roughly similar to the test-retest reliability of the Big 5 psychometric test.

Overall, the internal consistency of the four MBTI scales is exceptionally high in all samples available to date. You can find much more information about the reliability and validity studies conducted in the MBTI® Manual – Third Edition.

Literally thousands of research studies have been conducted with the MBTI assessment. You can find these studies in the Isabel Briggs Myers Memorial Library. Some of these studies include:

The point is, rigorous research has been conducted to support the MBTI model. Correlations of the four dichotomies (I/E, S/N, T/F, J/P) with a wide variety of scales of other instruments support the predictions of type theory.

Is This Scientific Enough?

I don’t know if a research study will ever be able to completely prove the scientific reliability of any personality questionnaire. But the MBTI® ranks very highly as one of the most thoroughly tested and scientifically researched typology theories to-date. I’ll be keeping my eyes open for any more research that comes out in the future and will keep you all posted here on my blog! You should also check out Dario Nardi’s Google Talk about type theory and the brain! 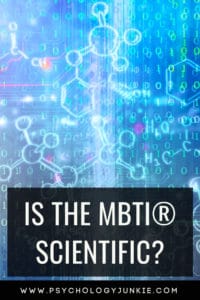 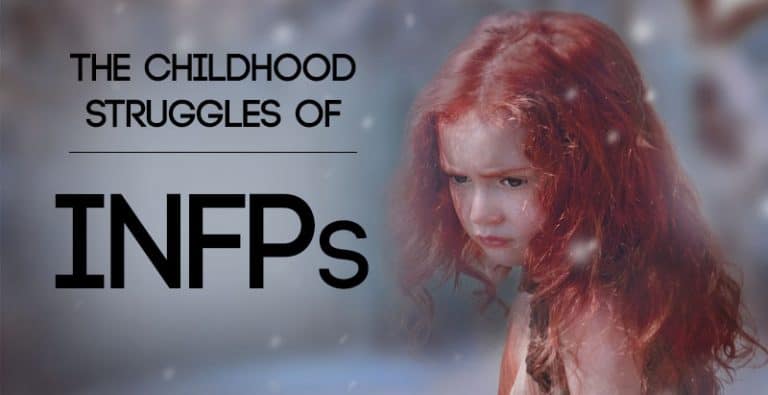 INFP children are some of the most emotionally rich, creative individuals you’ll ever meet. Their strong personal values, philosophical nature, and insightful way of viewing the world make them stand out from the crowd. They are seen as sensitive souls and are often more on the quiet side as children. Myers-Briggs® expert David Kiersey calls… 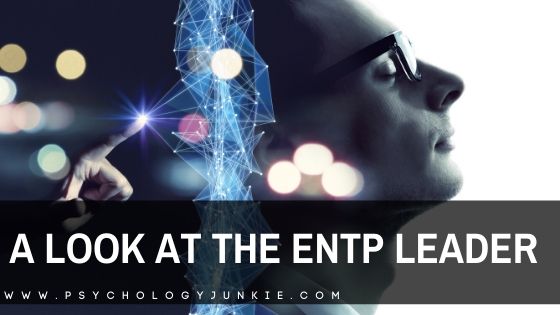 ENTP Leadership – The Strengths and Struggles Let’s try to define an enigma, shall we? Sounds fun. Grab a little sippy-sip of your sip stuff, as Emperor Kuzco would say, and settle in. ENTPs are quite innovative and as a result often acquire backing from others who admire their ideas. These types can easily inhabit… 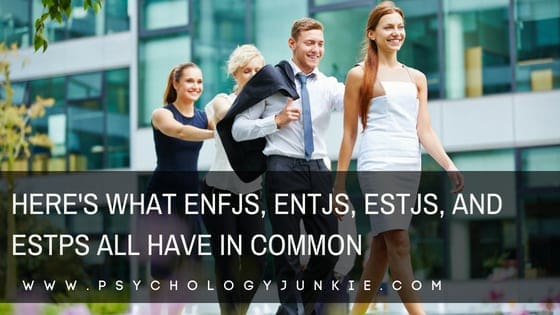 One of the things I love about personality type is that there are unusual similarities and common goals that are shared between seemingly disparate types. Looking at the ENTJ, ESTJ, ENFJ and ESTP personality types you might be confused by what they would have in common. I mean, they are all extroverts, but some are… 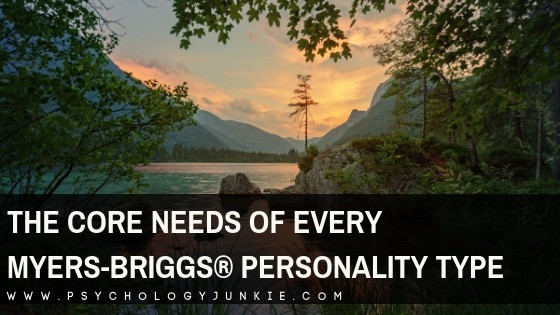 Do you ever wonder how other people get through their day when their needs are so different from yours? Perhaps you’re someone who craves a routine, security, and a quiet life and you’re baffled by people who like a lot of noise, excitement, and spontaneity. Each of the 16 Myers-Briggs® personality types has unique core… 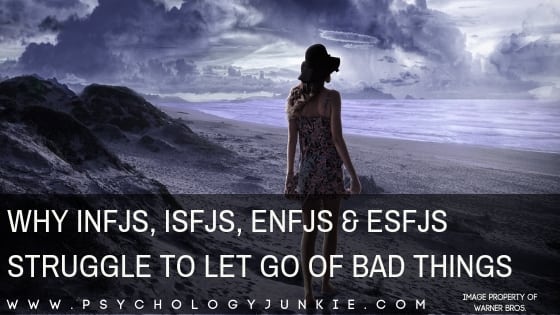 If you’re an ESFJ, ENFJ, ISFJ, or INFJ type, then you probably know how hard it is to let go of bad things that happen to you. By “things” I mean something that has to do with an interaction or relationship with another person. If something bad happens that doesn’t involve another person it might… 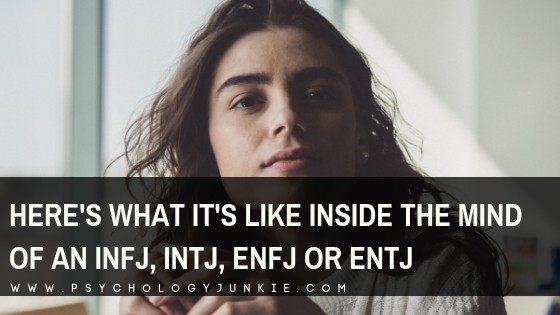 Have you ever wondered how other personality types REALLY think? Sure, we can read lots of descriptions about how to identify the types or what their strengths might be, but what is it like inside their head? That’s what today’s article is about! A few days ago we talked about the mind of the NP…