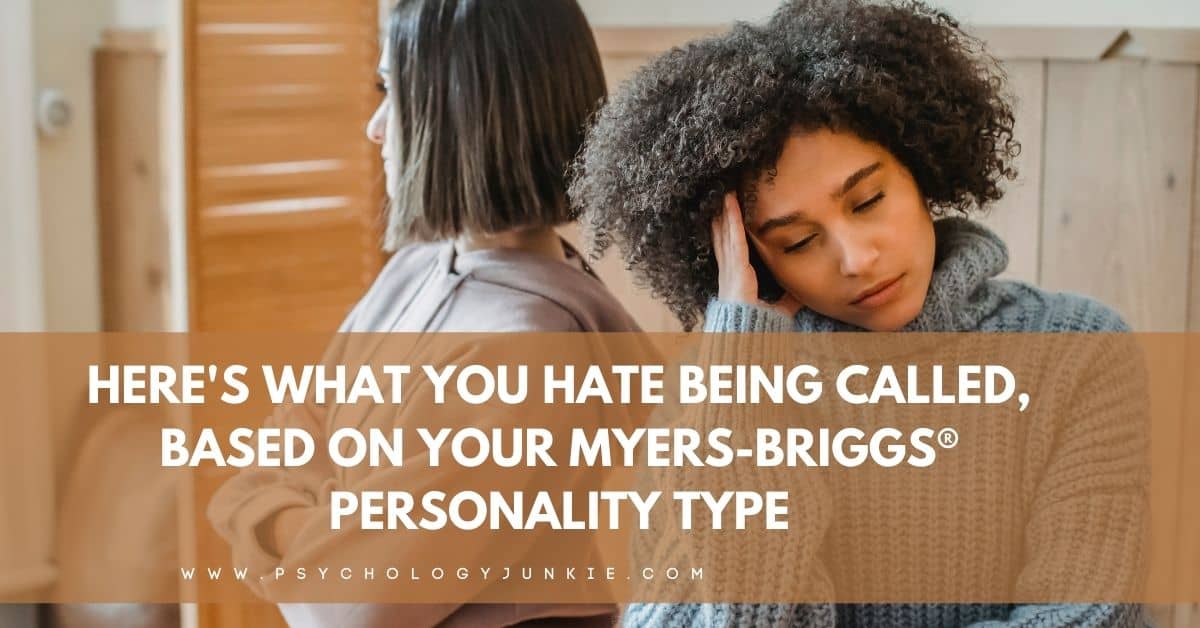 You despise being labeled flirty because of your warm, welcoming disposition. Yes, you’re expressive and inclusive, and you know how to have a good time. That doesn’t imply you’re attempting to attract anyone but friends and inspiring conversation.

Read This Next: What It Means To Be an ENFP Personality Type

You hate being called trollish, simply because you’re arguing your point. You don’t want to offend anyone; you just want people to look deeper at their assumptions and challenge their thought processes. You enjoy a good debate, but the goal isn’t to “be obnoxious.”

You despise being called overly sensitive because you care and you feel things deeply. Over-sensitivity implies (to many people) a sense of inadequacy and an inability to cope with the harsh realities of life – which is not you. Many people shy away, compartmentalize, or distract themselves when confronted with difficult truths of life. Instead, you approach complex situations with empathy and depth – and sometimes that takes more courage than turning a blind eye.

Read This Next: 26 Memes INFPs Will Relate To

You hate being called cold-hearted or uncaring, simply because you care more about truth than tact. You are genuinely concerned about the well-being of others, but your focus is more on clarity and accuracy than emotional sensitivity. You won’t say you want to do something if you don’t feel like doing it most of the time. You’d rather be honest and up-front about that than lie to spare someone’s feelings.

Read This Next: 10 Things That Terrify INTPs

You despise being labeled as “bubbly” as if it’s a dirty word. You’re charming and vivacious, but you aren’t flighty or ineffectual. Some people see your energy and charm and put you in a box or make assumptions about your strengths and weaknesses. You can have energy, charisma, and people skills and still be a scientist, a surgeon, or a business person. Bubbly doesn’t mean brainless or hyper-sensitive.

You hate being called mean or bullheaded, simply because you are uncompromising. You set high expectations for yourself and others, but that doesn’t mean you don’t care. Legacies are built on great accomplishments; there’s no reason to compromise at any stage of the game. Some people think only mild-mannered, tactful people care about others. But you show you care by getting things done, offering practical advice, or investing in people so they can become better than they thought they could be.

You hate being called unrealistic or idealistic, simply because you have higher hopes for humanity than most. Being visionary isn’t the same as being naive, and pragmatism can be used as a cover for apathy and selfishness. Higher hopes and dreams don’t mean you’re ignorant of the real problems we face as humans. You just think we can do better than we’ve been doing so far.

Read This Next: A Look at INFJ Rage

You hate being called pretentious or arrogant because it’s typically a complete misunderstanding of who you are. Yes, you’re quiet and analytical. That doesn’t mean that you don’t care or that you are trying to make other people feel stupid. You don’t think you’re above other people just because you’d rather read a book than engage in small talk. You might enjoy debating a subject, but if others are unwilling to engage with you or erupt in rage because you expressed an opposing viewpoint, you may choose to withdraw rather than get caught up in an emotional squabble.

Read This Next: 10 Things That Terrify INTJs

You hate being called shallow simply because you notice all the details and sensations life has to offer. Some people think if they can’t pigeonhole you, label you, or put you in a box they can’t understand who you are or what matters to you. But life is composed of experiences and interactions. We all want to have a good time, laugh, dance, and enjoy life. These are the genuine, raw, beautiful experiences that make us feel really and truly alive. Calling it “shallow” is just shortsighted.

If someone calls you “bud” or “son” they better be listed as “father” on your birth certificate. Otherwise, you’ll either completely ignore them or retaliate with a comeback that turns the tables on their patronizing attitude.

You hate being called cute because usually it’s said in a way that’s condescending or dismissive. Often it’s said when you care passionately about something, and the person listening is trying to trivialize what you care about. You don’t talk unless you have something significant to say, so being called “cute” is likely to detract from your efforts to express something important.

You hate being called selfish simply because you don’t go with the flow or feel a need to be a people-pleaser. You prefer to be honest about what you want (or don’t want) rather than pretending to go along to get along. But that doesn’t mean you’re self-centered or rude. You aren’t callous or indifferent—you simply trust yourself to know the best path for your life. If you don’t want to attend a social event, attempting to fake interest isn’t going to help anybody.

Because it’s usually condescending, you despise being called overly emotional. The majority of individuals who say this are attempting to belittle your competence or intellect by doing so. It doesn’t make your points invalid because there’s emotion behind them. You rely on your feelings and experiences to relate to and comprehend people. It irritates you when other individuals brush aside your viewpoints because you expressed them with passion.

You hate being called stubborn or bossy because you tend to take charge if things are out of control. You are naturally wired to see inefficiencies and correct them, but you hate that certain people turn this into the belief that you’re “power-hungry.” You’re not stubborn for the sake of being stubborn. You truly want to make your life and the lives of everyone around you better.

You despise being referred to as a rule-follower, as if it’s a dirty word. Yes, you appreciate knowing the rules because they make life easier and minimize emotional upheaval for everyone concerned. But you dislike it when others take the position that because you’re traditional or stick to the rules, you can’t be spontaneous, creative, or fun. It sometimes feels like being a rule-follower is an exception rather than the norm.

Read This Next: 24 Signs That You’re an ISFJ

You despise being labeled old-fashioned since most people use the term in a condescending way. You aren’t exactly interested in whatever is trendy right now for the sake of being hip. You’re all about adopting new methods if they’re beneficial, practical, and trustworthy. Being called old-fashioned implies that what you believe is dated when in fact the values you adhere to are timeless to you. They’re tried and tested and you’re not about to just jettison them for the next trend that comes along.

Did you enjoy this article? Do you have any insights or personal stories to share? Let us (and other readers) know in the comments!

ENTJs don’t just come up with great ideas, they get them done. These innovative thought leaders are excellent at coming up with plans, business concepts, and ideas that they see through to the end with their hard work and dedication. ENTJs are passionate, ambitious, and tireless in their efforts to achieve their dreams…. 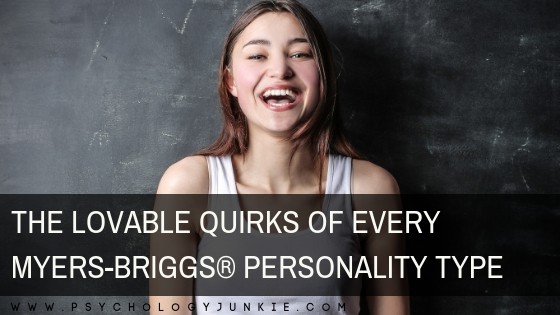 Not sure what your personality type is? Take our new personality questionnaire here. Or you can take the official MBTI® here. The ENFP You have a rare ability to be charming and completely rebellious at the same time. You have almost zero respect for traditions or doing things the way they’ve always been done. You… 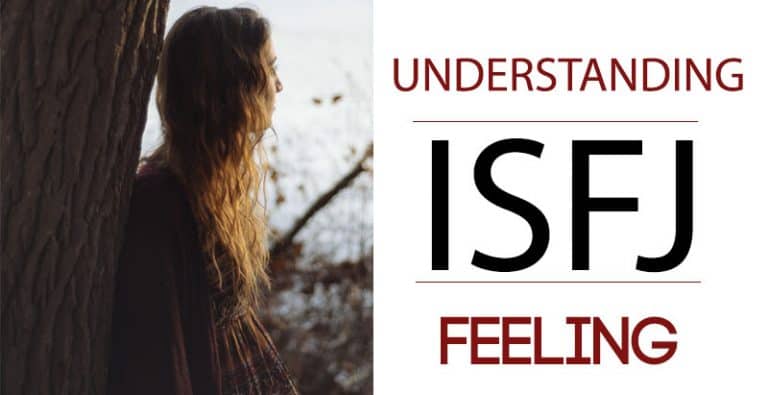 “We think sometimes that poverty is only being hungry, naked and homeless. The poverty of being unwanted, unloved and uncared for is the greatest poverty. We must start in our own homes to remedy this kind of poverty.” – Mother Teresa, an ISFJ The heart and mind of the ISFJ is a warm and perceptive… 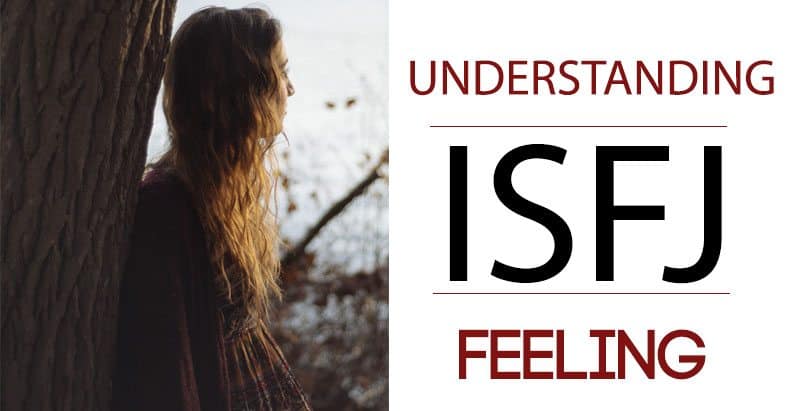 INFJs often get the uncanny feeling that they are strange or out of place in the world around them. While they may flood typology forums or Facebook groups, they are less likely to be seen in day-to-day life. As one of the rarest personality types, they have a difficult time meeting someone like them in… 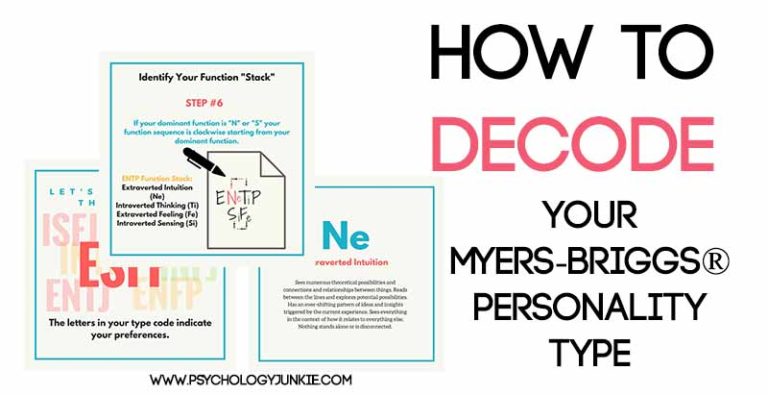 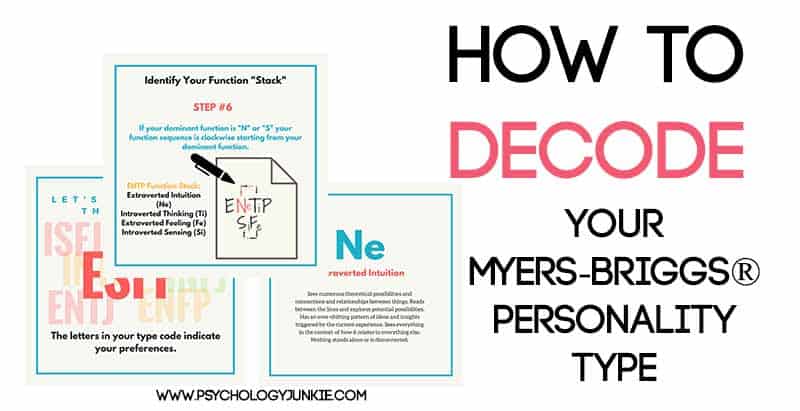